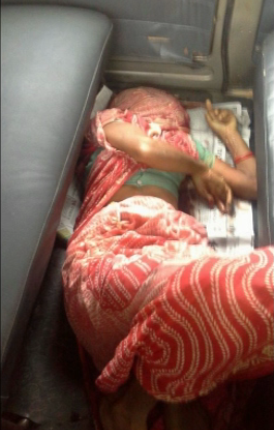 Khurda: In a tragic road mishap on the Mangalajodi-Tangi service road in Tangi block of the district, two persons, including a woman, died as a speeding tractor mowed down the bi-cycle they were riding on in the morning today.

The deceased have been identified as Kunti Sahoo and her son Bibhu from the Mangalajodi village.

According to reports, the mother and son, who happen to be daily wagers, were on their way to work to a nearby village riding a bicycle when the mishap happened. Bibhu, who was riding the bicycle with Kunti on the pillion, was suddenly hit by a speeding tractor near a turn on the Mangalajodi-Tangi service road which mowed down both of them. Kunti bled profusely due to head injury and died on the spot.

Bibhu was shifted to a nearby hospital in a critical state where he succumbed to his injuries later in the day.

Tangi police reached the spot and seized the dead body along with the vehicle involved in the accident.

Police has arrested the driver of the tractor and his interrogation is on.

Differently-abled Prashant an inspiration for millions

NGT stays work on 6 projects of Chhattisgarh Govt on Mahanadi