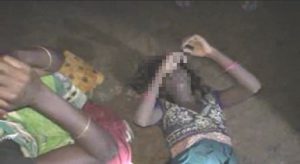 Soro: In a shocking incident, a minor girl drowned in a tailing pond while immersing Ganesh idol at Gagua village under Khaira police limits in Balasore district on Sunday evening.

The deceased has been identified as Gurubari (12), daughter of Gopal Bindhani of Gagua village.

The minor victim, who studied in Standard IV of Gagua Sebashram School, reportedly visited a moram mine tailing pond located near the village to take part in Ganesh idol immersion on Sunday evening with a group of friends. However, after jumping into the pond along with her friends to immerse the idol she did not come out of the water for long. As the victim’s friends reported the matter to her family members, they immediately called up Khaira Police.

Police fished out the body of the girl from the pond with the help of fire personnel this morning and sent it to Khaira Medical for autopsy.

A pal of gloom has descended on the village following the incident.