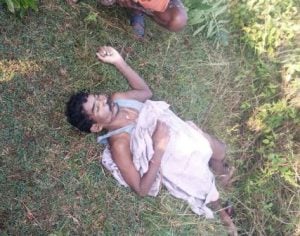 Angul: Tension ran high in the Badabadar village under Thakurgarh police limits in the district today, after dead body of a man was found from a nearby forest.

The deceased has been identified as Gopal Nayak of Badabadar village. He did not return home after leaving his home for some work in the last evening.

Some locals who visited the forest early this morning spotted the body of the victim lying at a secluded place with injury marks on it. They immediately called up Thakurgarh Police which reached the spot and seized the dead body.

Police have registered a case and started investigation into the incident.

Locals are suspecting it to be a case of murder and have claimed that the victim has been thrashed to death by some unidentified miscreants.