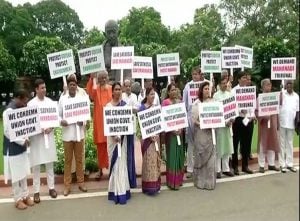 New Delhi: Reiterating Odisha’s rightful claim on Mahanadi river water and pushing the Central Government to set up a tribunal to look into its dispute with Chhatisgarh over barrage construction, a number of MPs from the state cutting across party lines staged a protest under the Mahatma Gandhi statue in Parliament premises on Thursday.

As many as 20 MPs from the Biju Janta Dal (BJD), along with Congress’ Rajya Sabha MP Ranjib Biswal, took part in the demonstration holding placards reading messages like, “Save Satakoshia, Save Mahanadi”, “Protect Chilika, Protect Bhitarkanika, Protect Mahanadi”, and “Protect Odisha, Protect Environment”.

Expressing anguish over the Central government’s apathy in pressurizing the Chhatisgarh Government to halt several of its projects upstream of Mahanadi, BJD MP Tathagat Satpathy who took part in the demonstration said the Centre should complete all formalities to constitute a water tribunal to look into the inter-state river water dispute. Odisha people would not bow down before anybody except Lord Jagannath and fight till they get their legitimate right on the Mahanadi river water, he added.

On the other hand, the five-day-long ‘Mahanadi Bachao Satyagraha’ started by the Agami Odisha socio-cultural group at Jantar Mantar to put pressure on the Centre to address Odisha’s claim on Mahanadi entered its third day today. The Satyagraha aims at persuading the Chhattisgarh Government to adhere to the NGT directive asking the Raman Singh government to stop construction work on 31 projects on Mahanadi.