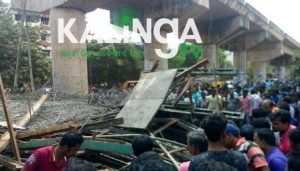 Bhubaneswar: Expediting action in the Bomikhal flyover collapse case on Sunday, which killed 1 person and left 20 others injured, the Twin City Commissionerate Police issued a look out circulars against two absconding directors of Panda Infra.

The look out circulars were issued against Sujata Panda and Santosh Panda.

Pratap Panda, the Managing Director (MD) and the only arrested member of the construction company’s board of directors was sent to jail on Tuesday after his bail plea was rejected by a local court here. He was remanded to judicial custody for a period of 14 days.

Meanwhile, a PIL was filed in the Odisha High Court in the flyover collapse case today. Seven persons, including Odisha Chief Secretary and the PWD Secretary, were made parties in the PIL. The PIL demanded an SIT probe into the case along with cancellation of the license of the construction company.