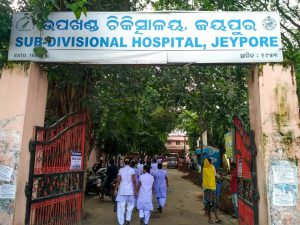 Jeypore: A long-standing demand of the residents of Jeypore town in Koraput district in Odisha was fulfilled on Monday as the Chief Minister Naveen Patnaik declared the up-gradation of the Sub Divisional Hospital in the town to District Headquarters Hospital.

The Chief Minister announced the conferment of the new status on the hospital after a delegation of local residents, led by senior BJD leader and former minister Rabi Narayan Nanda, met him at his residence, Naveen Niwas in Bhubaneswar yesterday.

“The sub-divisional hospital at Jeypore is upgraded and given district headquarters hospital status,” Patnaik announced.

“The up-gradation of Jeypore hospital is a welcome step for the people of undivided Koraput district as a sizeable population of the three districts of Koraput, Malkangiri and Nabarangpur town depend on this hospital,” said Satish Patnaik, a resident of Jeypore.

Jeypore MLA and Congress Chief Whip in the Odisha Assembly Tara Prasad Bahinipati criticised the Chief Minister for seeking to derive political mileage for the BJD.

“We would have been pleased if Naveen Patnaik had made the announcement from the Secretariat instead of his residence in the presence BJD workers,” said Bahinipati at a press conference.

Incidentally, Bahinipati, along with hundreds of party workers, had gheraoed the Sub Collector’s office at Jeypore and sat on a dharna  on Monday to press the demand to up-grade the Sub Divisional Hospital to District Headquarters Hospital.