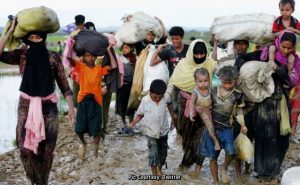 New Delhi: The Government of India on Thursday started “Operation Insaniyat” to provide assistance to Bangladesh on account of the large influx of Rohingya refugees into that country from Myanmar.

Under this operation, relief material consisting of a range of items including rice, pulses, sugar, salt, cooking oil, biscuits and mosquito nets will be provided to the affected people, an External Affairs Ministry statement said.

A total of 7000 metric tonnes of relief materials will be delivered in multiple consignments to the neighbouring country.

In the first tranche, 53 tonnes of relief materials have been sent to Chittagong by an Indian Air Force (IAF) plane today, High Commissioner of India to Bangladesh Harsh V Shringla tweeted.

The Ministry said India has always responded readily and swiftly to any crisis in Bangladesh in view of the close ties of friendship between the people of India and Bangladesh.

Rohingyas are a stateless ethnic minority, mostly Muslims, from Rakhine province of Buddhist-majority Myanmar, who are forced leave their country due to communal violence and repeated military operations against them.