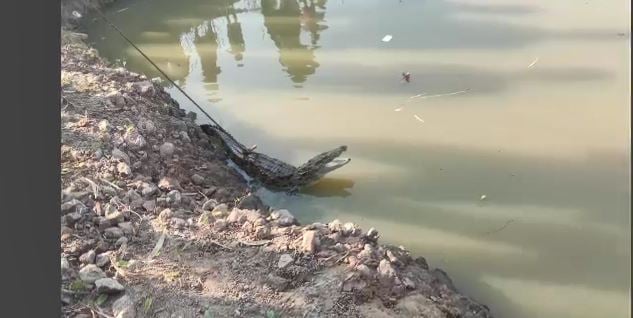 Malkangiri: A huge crocodile was rescued in Sadashivpur village in Malkangiri district of Odisha on Wednesday. When the local fishermen were fishing in the village pond, the huge crocodile got trapped in the net.

As per reports, after the huge crocodile got trapped in the fishing net, the fishermen thought it to be a huge number of fishes. However, as they pulled the net, it was seen that a gigantic crocodile had been entangled into the fishing net.

Soon, the fishermen informed about the crocodile to the Forest department officials. Accordingly, forest officials from Balimela Range rushed to the spot. The crocodile is under treatment now.

It has been estimated that the it will take about three to four days for the crocodile to recover completely. After it will completely recover, the huge crocodile will be released into its habitat.