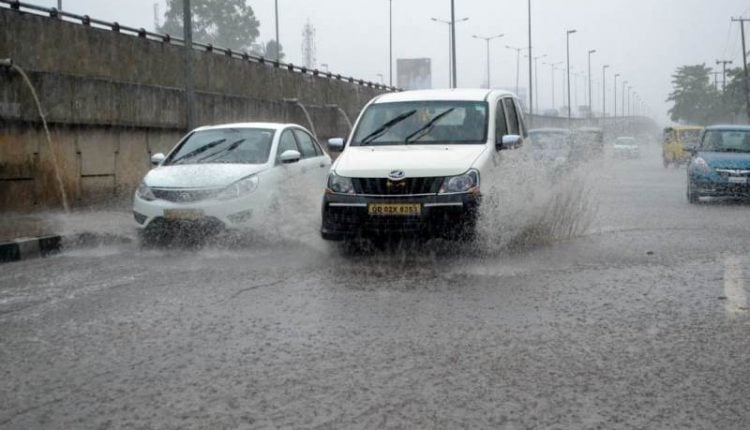 Bhubaneswar: Life was thrown out of gear in most parts of Odisha including the state capital Bhubaneswar, as heavy rain triggered by a Well Marked Low Pressure (WMLP) over the northwest Bay of Bengal lashed since last night.

While rivers like Bansadhara and Rushikulya are in spate due to heavy downpour the Rayagada district seems to be worst affected in the rain so far. The water is flowing above the danger level in Bansadhara in Gunupur of Rayagada and Kashi Nagar of Gajapati districts. Jhuriguda panchayat of Chandrapur block has been cut-off from the outside world as rain water washed away the Madugaon canal bridge last night. Excess rain water has entered into almost all canals flowing in Bisamkatak, Muniguda, Chandrapur, and Kashinagar blocks following the rain leaving people in a state of panic in the district.

Rayagada Collector Gunha Punam Tapas Kumar said, the district has been put on high alert and steps are being taken to provide dry foods to people in flood affected areas. Similarly, ODRAF teams has been kept ready in areas like Gunupur, Gudari, Gumuda and Kalyansinghpur to handle any kind of eventuality.

On the other hand the low pressure triggered rainfall created havoc in the state capital Bhubaneswar also. Waterlogging gave rise to traffic chaos starting from the morning today with several low-lying zones like Jayadev Vihar, Nayapalli Behera Sahi as well as Bomikhal submerged under rain water. Traffic snarls were also caused by the stagnant rainwater at Master Canteen, Vani Vihar and Patia areas.

While commuters on the National Highway passing in front of the ISKCON temple got a small respite from water logging due a drainage restoration work which has been taken up by the BMC, the picture remained gloomy as usual in other parts of the upcoming smart city.

However, the Bhubaneswar Mayor Anant Narayan Jena has assured that all possible steps are being taken to tackle the waterlogging problem and there is no need to get panicked.

“The administration is well aware of the situation emerging out of heavy rainfall and is also prepared to tackle it. We had taken new steps to restore the drainage system in front of ISKCON temple which is working. Water pumps have already been engaged in low-lying areas of the town like Gouri Garden and Malik Complex to handle waterlogging situation and similar steps are being taken for other areas. BMC’s expert team including sanitary inspectors, supervisors, health officers and engineers have been alerted and they are taking minute stock of the situation”, said Jena.