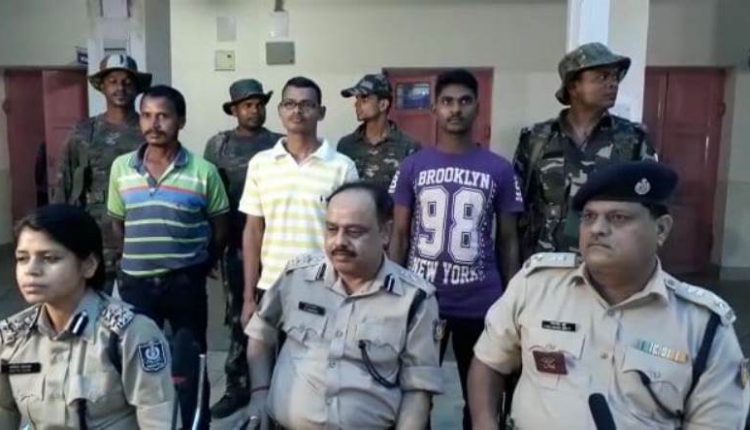 Rourkela: Four Maoists including a 15-year-old surrendered before Rourkela Police in Sundargarh district on Friday.

According to a press releases issued by the SP’s office, Matu Buding son of Late Mangal Buding of Baduiya village under Chhotnagra Police Station in West Singhbhum district of Jharkhand joined the CPI (Maoists) Organization in 2009 as a Militia.

Initially, he was engaged as a ration carrier and helped Maoists in providing logistics during meetings in their villages. But he was arrested in 2010 by Chhotnagra police for his involvement in a landmine blast in Jamkundi under Chhotnagra Police Station and was in jail custody in Chaibasa.

He worked as a party member in SDS division of CPI (Maoists) headed by Anmol until June 2018. Due to consistent anti-Naxalite operations by police forces and harassment by senior Maoists cadres he gave up arms and surrendered before the police. He was carrying a reward of Rs 1 lakh.

Sushil Munda son of Pandu Munda of Lunga village under Mahulpada police limits of Sundergarh district joined the Maoists organization after a meeting was held in their village by Anmol. He was motivated by the Maoist ideology and joined the CPI (Maoist) Organization. But due to unhealthy condition and continuous harassment by senior Cadres he left the Party.

Jagan Singh, son of Sartha Singh of Karda village under Chandiposh police limits in Sundergarh district joined the Maoist group in 2010 at the age of 15 being motivated by Anmol.

After joining the outfit he went to Kolhan, Saranda and took arms training under the leadership of Sandeep and later on was trained in Kandhamal District.

During the course he moved in Bundu, Chandil, Kolhan and Saranda till 2012. He was involved in Exchange of Fire in Boudh, Kandhamal, Angul, Sambalpur, Deogarh and Sundergarh districts. Due to his fluency in all the native languages in Odisha and Jharkhand, he was an important accomplice of Anmol and in due course he was promoted to the rank of Deputy Commander of SDS Platoon (ACM).

He left the Maoists organization due to constant threat to life, ageing parents and frustration with the Maoists ideology and surrendered before the Rourkela Police, said policeadding he was carrying a hefty reward of Rs 4 lakh on head.

Gomia Munda son of Karmu Munda of Kendudihi village under Rugudi police area in Keonjhar district was a Jan Militia since 2008 and was close acquaintance of Gunga Munda aka Gunga and Mochhu.

In due course of time he was made Militia commander. He helped them in providing logistics support, rations and uniforms etc. When Maoists cadres surrendered he decided to surrender before police and expressed his willingness to join the mainstream of society.