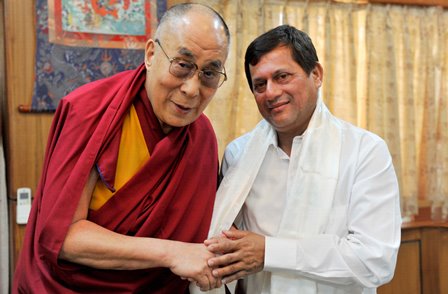 Bhubaneswar: Dalai Lama, the spiritual leader of Tibet will be conferred with the 10th KISS Humanitarian Award at a glittering ceremony on November 21.

Dalai Lama will be the first Nobel Prize awardee to get the KISS Humanitarian Award. He will address the 27,000 tribal children of Kalinga Institute of Social Sciences (KISS).

The KISS Humanitarian Award was instituted in 2008 by founder of KIIT and KISS Dr. Achyuta Samanta to honour and recognise individuals with exceptionally high contribution to the society in various fields related to social issues.

Hollywood actor and United Nations Population Fund (UNFPA) Global Goodwill Ambassador Ashley Judd was given the award on 10th February 2017 for the year 2016.