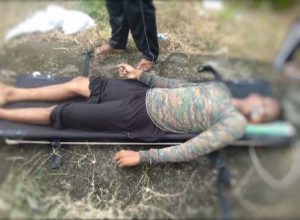 Rayagada: In a tragic incident, a CRPF jawan drowned to death after falling into a nullah during a combing operation in Raibiji area under Dangasorada police limits in the district on Wednesday.

The deceased jawan has been identified as Shiva Mundari of the 8th Batallion of CRPF and a resident of N Nargada village in Sundargarh district.

Reports say a Shiva was part of a group of 8th Batallion CRPF jawans, which was carrying out a routine combing operation near Manajhola Watershed Project on the foothills of Godargudi under Chandrapur block of the district today morning. Unfortunately, Shiva lost balance near Raibiji area slipped into a nullah. He sustained serious head injury and drowned to death.

Dangasorada Police has lodged a case of unnatural death in the incident and has started investigation to ascertain the circumstances under which the victim fell into the nullah and met a watery grave.