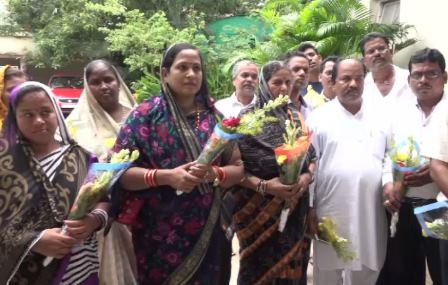 Bhubaneswar: Even as BJP President Amit Shah reiterated his ‘Mission 120’ – winning 120 out of the 147 Assembly seats in Odisha – for the 2019 elections at a press conference here today, seven councilors of Buguda NAC in Ganjam district joined ruling BJD at Naveen Nivas, BJD supremo and Chief Minister Naveen Patnaik’s  residence.

Patnaik welcomed them into the party in the presence of former Minister Pradeep Panigrahy.

“I am glad that the councilors of Buguda NAC have joined the Biju Janata Dal. This will strengthen the party,” said the BJD president in his reaction.

The seven councilors, five from Congress party and two are independents, said that they joined the state ruling party influenced by the work of CM and his party.

“We were in the Congress for the last four years. But we decided to join BJD as we did not notice any developmental work in the NAC and were also influenced by Chief Minister Naveen Patnaik’s  transparency in governance,” said one of the Congress councilors who joined the ruling party today.

The joining of the councilors has come as a great boost for the ruling party coming as it did barely hours after Shah’s confident assertion of winning 120 seats in Odisha in the 2019 elections.