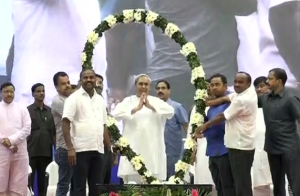 Cuttack: As a part of Odisha Government’s initiative to provide safe drinking water to urban population, Chief Minister Naveen Patnaik launched a slew of drinking water projects and water testing labs through video conferencing at a special event held at Indoor Stadium in the city on Friday.

In the presence of several top BJD leaders and ministers, the Chief Minister laid the foundation stone of 555 new watershed projects which would cater to the drinking water needs of people under 101 Uraban Local Bodies (ULBs) in the state at a cost of Rs 783 Cr.

The Chief Minister also inaugurated 182 newly set up watershed projects under 64 ULBs across the state. Erected with a project cost of Rs 157 Cr these projects would guarantee safe drinking water to around 90% population of Cuttack.

While earlier people in Odisha were dependent on neighbouring states for water testing now they would get it done with new testing laboratories in 6 cities of the state which were inaugurated by the Chief Minister today.