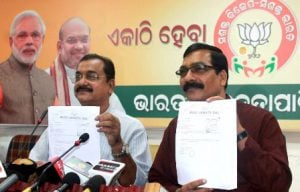 Speaking at a press conference here this morning, BJP State vice president Sameer Das said the funding received by BJD in the party account during the last General Election in 2014 came from suspicious sources. Naveen Patnaik, who proclaims himself as an epitome honesty and probity, needs to make the source public immediately, he said.

Citing a Real Time Gross Settlement (RTGS) number 538976288 through which the payments were allegedly made, Mohanty claimed that the money received by the ruling party through this route came from dubious sources for election spending.

Seeking immediate clarification from the BJD supremo on the issue, Mohanty said the BJP would take the matter to the Election Commission (EC), Income Tax (IT) department as well as the Enforcement Directorate (ED) if it doesn’t respond soon. He said the true face of Naveen would come to the fore and his anti-graft stance would be proved to be a drama when the truth comes out.

Senior Congress leader and Leader of Opposition (LoP) in the Assemby Narasingha Mishra also took potshots at the BJD and it’s chief claiming ruling party members had stonewalled any discussion when he had raised the issue in the House last year. His effigy was also burnt by the BJD party members outside the House, Mishra pointed out. However, Mishra expressed satisfaction over the fact that the truth had come out finally. “It is better late than never,” he said.

On the other hand, BJD took no time to react to the allegation with party spokesperson and MP Pratap Deb claiming that the report regarding ‘dubious funding’ aired by an English news TV channel yesterday was not based on facts and was prompted by vested interest. BJD had already made its funding public under the available legal provision and a discussion had also been held in this connection in the House, he added..