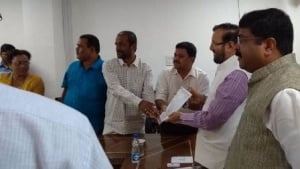 Javadekar, who met a delegation of the Parents’ Association this afternoon, asked the CBSE officials to withdraw the review petition by tomorrow.

A four-member delegation under the leadership of Basudev Bhatta, president of the Parents’ Association, met the Union Minister and apprised him of the matter. They also submitted a memorandum urging him to take action in the matter.

Speaking to Kalinga TV after the meeting, Bhatta said, “The meeting was very fruitful. When the Minister came to know that 9000 students from Bhubaneswar Zone had applied for rechecking and out of the 9000, the marks of 500 students were either increased or decreased after reevaluation. The Minister found fault with the CBSE for not taking parents into confidence and students and said it is unacceptable.”

The HRD Minister all said that students can apply for the xerox copy of all subjects till 30th June 2017. Besides, the CBSE will not oppose if the examinees take orders from the court for reevaluation.

The Minister also directed the CBSE officials to refund the money if the marks are increased post reevaluation.

This apart, Javadekar assured that the reevaluation will be opened for all from next year.

Union Minister Dharmendra Pradhan and top CBSE officials were present during the meeting.