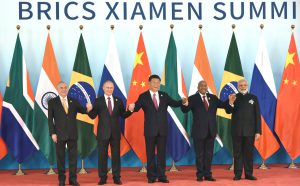 Xiamen: The 9th BRICS summit here on Monday shared India’s concerns over rising terrorist attacks worldwide, including attacks in member countries. It strongly deplored terrorism in all its forms, stressing that there can be no justification whatsoever for any such act.

In a joint declaration, BRICS countries – Brazil, Russia, India, China and South Africa – named Pakistan-based groups like Lashkar-e-Taiba, Jaish-e-Mohammed and the Haqqani network for the first time in a strongly-worded declaration condemning terror.

The BRICS countries also expressed concern on the security situation and violence caused by the Taliban, Islamic state, Al-Qaida and its affiliates. The declaration also reaffirmed BRICS’ support to the people of Afghanistan in their as well as international efforts to achieve peace and national reconciliation.

Prime Minister Narendra Modi, who participated in the Summit, raised the issues of international terrorism and the need for a ban on all active terror groups. Talking to reporters in Xiamen, Secretary (East) Preeti Saran said, Modi proposed an initiative by the BRICS for countering radicalisation.