Body of Odisha youth to arrive from Saudi in two days 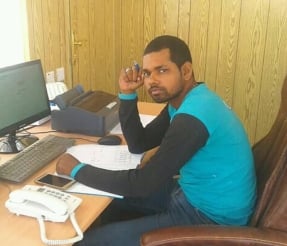 Cuttack: Family members of Odia youth Sudarshan Pradhan, who died in Saudi Arabia on September 1 while working for a private company there, would get the body of the deceased in a day or two after a week-long wait following the intervention of External Affairs Minister Sushama Swaraj at the behest of Kendrapara MP Baijayant Panda. Swaraj initiated the process in this regard after the family of the deceased submitted all required documents sought by the ministry on Friday.

Sudarshan’s body would reach his village in a day or two, informed family members.

The deceased, identified as Sudarshan Pradhan of Bainchua village under Mahanga block of Cuttack district, joined a trading and construction company in Saudi Arabia namely, Salem-Saleh-Al-Hareth Estate as a Computer Operator on February 20 this year and worked there till his death in an accident on  September 1. While the family members of Sudarshan came to know about the mishap from a WhatsApp message sent by one of his friends, who also works in Saudi Arabia, the company authorities did not report the matter to them. More shockingly, while it has already been a week since the incident happened, the Saudi Arabian company has not taken any steps to send the body of the deceased back to his village in India.

Worried over the matter, Sudarshan’s mother Jayanti Pradhan lodged an FIR at the Mahanga Police Station on Friday claiming that her son could have been murdered in the Saudi Arabia. If that was the case, she demanded stringent action against those responsible for it.

The family of a neighbour of Sudarshan tweeted the matter to the External Affairs Ministry, Government of India a few days ago.

Sudarshan’s brother Rajendra Pradhan also wrote a letter to Kendrapara MP Baijayant Panda in this regard requesting his intervention in bringing back the body of the deceased.

Panda acted on the letter immediately and took the matter to the notice of the Indian embassy at the Saudi Arabia.