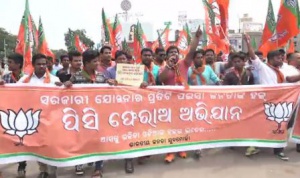 Bhubaneswar: The state unit of BJP on Monday staged a demonstration at Master Canteen Square here to protest against collection of percentage commission (PC) in government work orders in Odisha.

Apart from the Capital city, Bharatiya Janata Yuva Morcha (BJYM) activists are also holding the protest at five other places in the state.

The activists of the saffron party demanded that the BJD must return the total amount of PC it has collected during its 17 years of tenure to the state exchequer. The money should be used for the welfare of the poor in the state.