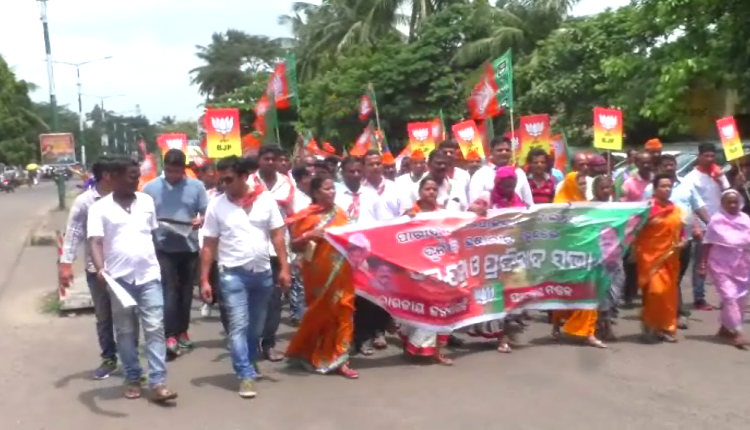 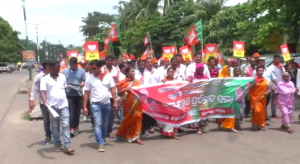 Paradip: Even as Paradip Municipality celebrated the Local Self-Government Day by holding a series of programs on Thursday, the local unit of Bhartiya Janta Party (BJP) organized a rally in the port city protesting the growing corruption in the Urban Local Body (ULB).

A group of members from Paradip BJP unit and BJP Yuva Morcha organized the rally, which marched through the city in the morning, and resorted to sloganeering against the Municipality Chairman and Executive Officer for indulging in irregularities. The agitators held a protest meeting in front of the Municipality office and accused several Municipal officials of behaving like ruling party agents. The BJP activists appealed to the people in the area to defeat all ruling party candidates in the next election to pave the way for the development of the port city.

“Paradip Municipality has turned to be a party office for BJD. The ULB is celebrating the Local Self-Government Day but has defeated the basic purpose of this auspicious day. The Municipality is doing nothing for the development of the port city. Basic amenities like safe drinking water, sanitation, health and education are absent in the slum areas of the town. At this juncture, the ULB here has become the fiefdom of a bunch of looters. By observing the Local Self-Government Day today as a protest day, the BJPis trying to send a clear signal to the corrupt officials that the graft would not be tolerated by the people in the coming days,” said Gati Krushna Satapathy, a member of BJP state executive body.

Informing on the protest, Jagatsinghpur district BJP Yuva Morcha president Sampad Swain said, “While the Paradip Municipality is blowing its own trumpet of development today, electricity and safe drinking water still remain a distant dream for three Wards of Sandhakuda area under the ULB. Ward no 6 too is reeling under similar problems. Sauchalayas (toilets) under the Swachh Bharat Mission of the Central Government are also missing under the Paradip Municipality and we are protesting it.”