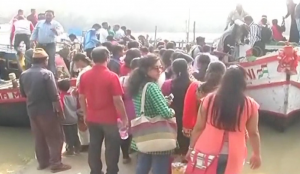 Kendrapara: The Bhitarkanika National Park reopened for tourists on Tuesday after remaining closed for three months for the breeding season of estuarine crocodiles.

“In view of the crocodiles’ breeding, a three-month long prohibition on the entry of tourists and visitors to the wetland site had been enforced from May 1 to July 31,” said Divisional Forest Officer (DFO), Rajnagar Mangrove (wildlife) Forest Division, Bimal Prasanna Acharya.

“The prohibition on tourists’ entry is imposed in the park as human interference disturbs the breeding of crocodiles. The reptiles turn violent and often attack the tourists during this period. The closure of the park for the short period aims to ensure the safety of humans and provide a congenial environment for the crocodiles to breed,” he added.

A nearly 145 sq km stretch of the national park, with its vast expanse of mangrove cover and wetland spots, is an ideal eco-tourism destination for camping and trekking. It was designated as a National Park on 16th September, 1998.