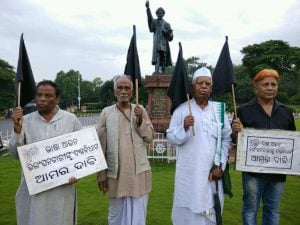 Bhubaneswar: In a significant milestone, “Bhasha Andolan Odisha”, a premiere Odia language movement in Odisha, on Friday completed 500 days of its movement and witnessed 415 days of its Black Flag March demanding enactment of a law making use of ‘Odia’ mandatory in all official business with provision for punishment to whoever contravenes the Orissa Official Language Act, 1954.

On May 21, 2017, the state government had brought an amendment to the Orissa Official Language Act, 1954 through an ordinance to use Odia language in state governance. But the members of Bhasa Andolan continued with their black flag protest march as the government didn’t add the provision of punishment for any violation of the law.

Besides Bhubaneswar, Black Flag Marches have been organised for the cause of the native language in several other places in the state, including Rourkela, Berhampur, Jajpur, Kandhamal, Nayagarh and Banki.