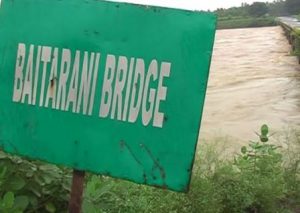 Anandpur: Fed by incessant rains over the last couple of days, River Baitarani in Balasore and Keonjhar district is in spate and has raised  fears of floods alers in the two districts. Keeping in view the possibility of floods, Keonjhar Collector held a review meeting at Anandpur Monday morning and took stock of the situation.

The review meeting attended by State School and Mass Education Minister and Ghasipura MLA Badri Narayan Patra, along with local MLA Mayadhar Jena, and held at the Anandpur Dak bungalow discussed the preparedness of the district administration to meet the threat of floods. A decision was taken in the meeting to keep National Disaster Response Force (NDRF), Odisha Disaster Rapid Action Force (ODRAF) and Fire Brigade teams ready to meet any challenge.

With the water level in River Baitarani flowing above the danger mark of 17.93 meters in Akhuapada and 38.36 meters in Anandpur, the relief teams have been kept on standby to rush to these places till evening today, according to the Keonjhar district administration.

Earlier in the day, the Special Relief Commissioner (SRC) issued a directive to the Collectors of six districts – Bhadrak, Balasore, Jajpur, Keonjhar, Mayurbhanj and Sundergarh – to remain alert in view of the flood situation. Collectors were told to ensure that field officials stay at their respective positions to deal with the situation.

The SRC directive holds significance particularly at a point when the MeT department has predicated heavy to very heavy rainfall in 24 hours over districts like Angul, Balasore, Dhenkanal, Deogarh, Mayurbhanj, Keonjhar, Jharsuguda, Sonepur and Sundergarh under the influence of an upper air cyclonic circulation formed over Gangetic West Bengal, which could turn into a low pressure area over Bay of Bengal.