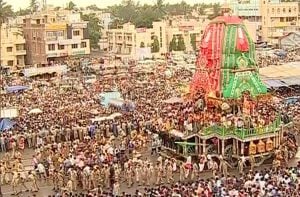 Puri: Amid full-throated chants of “Jay Jagannath”, lakhs of devotees began pulling the chariots of the three deities –  Lord Jagannath, elder brother Lord Balabhadra and their sister Devi Subhadra – on the Grand Road from the Gundicha temple to the Shree Mandir on the occasion of Bahuda Jatra today.

After completion of the rituals, pulling of Taladhwaj, the chariot of Balabhadra, began at around 2.20 pm. Pulling of Debadalan and Nadighosh, chariots of Devi Subhadra and Jagannath respectively followed next.

Earlier, all the deities were brought out one by one in Pahandi from the sanctum sanctorum of the Gundicha temple after observance of special Bahuda rituals. Puri Maharaja Gajapati Dibyasingha Deb performed Chhera Panhara on all three chariots before the pulling begun.

The deities would be decorated with ‘suna besha’ (golden attire) tomorrow on the chariots. The three deities will re-enter the shrine the following day to again adorn the ‘Ratna Simhasana’ and give darshan to their devotees till the next Car festival.

A tight, multi-layer security has been deployed over the seashore town Puri for the occasion.