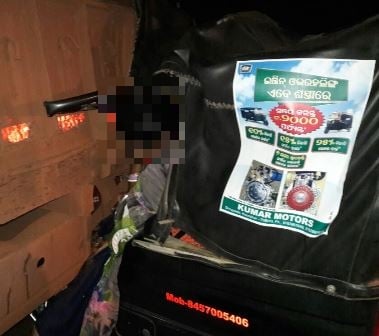 Angul: One person was killed and six others sustained critical injuries after an auto rickshaw dashed into a truck at Jhimirilpalli Square under Pallahara police limits in the district on Saturday night.

The deceased has been identified as Dulei Pradhan of Mankadchua village.

The victims were on their way back to village after visiting Laxmi Puja celebration in the Pallahara area late last night. The road mishap took place when the driver of the auto rickshaw failed to spot a stationary truck on the road and ended smacking into it from rear.

While Dulei died on the spot, six others on board the vehicle got critically hurt. They were rushed to the Pallahara hospital by Pallahara Police which reached the spot along with firemen after getting information of the incident.

Police have seized the dead body and  the mangled auto rickshaw.