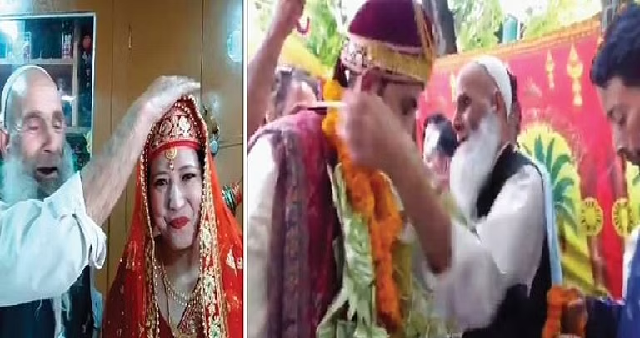 Local Muslims in Lar village of Ganderbal district attended the wedding of a Kashmiri Pandit girl whose family resides in the hamlet, upholding the long-standing communal unity in Kashmir.

Meenakshi Kumari, the late Pandit Mohan Lal’s daughter, married in Lar, and Kashmiri Muslims attended and celebrated the event as if they were the true hosts.

The Pandit family has been a longtime resident of the Lar village and has developed a strong emotional connection with its Muslim neighbours.

Local Muslims assisted the bride’s family with all the preparations in a nice gesture at their home. The local Muslim community cheerfully performed all tasks, including gathering firewood, erecting tents, cleaning the location and its surrounds, adorning the home, and serving tea to visitors.

The Pandit women who had come to take part in the marriage ceremony were seen dancing and singing with the local Kashmiri women while the men were busy making preparations. Muslim ladies gave the bridegroom and his family the customary Wanwun welcome, while young girls showered the visitors with flower plates.

Sheikh Ishfaq Jabbar, a Lar resident and former lawmaker, stated to Greater Kashmir, “We don’t feel that Kashmiri Pandits are a different community. They belong to us. We’ve coexisted for ages. We shall keep assisting them because we have a moral obligation.

According to Sanatham Dharam Sabha District President Ganderbal, Badrinath Bhat, both men and women from the Muslim community participated in all of the rituals throughout the course of the previous four days.

The Pandit visitors, some of whom were exiled community members, were overjoyed to see the brotherhood images in Lar come to life. A Pandit visitor from Jammu remarked, “I was startled to see Muslim ladies sing along to us while males made most of the arrangements for the guests.