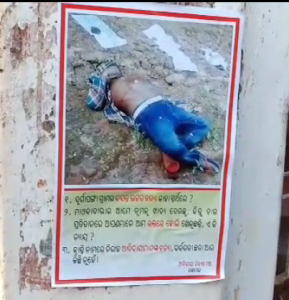 Kandhamal: Anti-Maoist posters questioning the legitimacy of the killing of ‘Gaon Sathi’ Basant Bhatt of Durgapanga village by ultras on suspicion of police informer last month, surfaced in the Baliguda area in the district today.

The posters released in the name of Adivasi Vikash Manch, a lesser known tribal group in the area were seen put up on the walls of Baliguda Post Office, Jagannath Temple and at a few places in the local market. Dubbing the Maoist killing of tribal in the name of revolution as sheer brutality and nothing else, the posters were seen demanding for justice.

The Adivashi Vikash Manch also slammed Maoists through the posters and claimed that innocent tribal are providing food to hungry ultras, but in return they are taking their lives branding them as police informers.

Notably, Maoists shot dead Basant Bhatt on October 17 and dumped his body in Durgapanga village, after keeping him in captivity for two days. At that time the ultras left posters on the spot released in the name of BGN (Bansadhara-Ghumusar-Nagavali) division of the outlawed CPI (Maoist) outfit categorically warning people of similar consequences if they turn police informer.