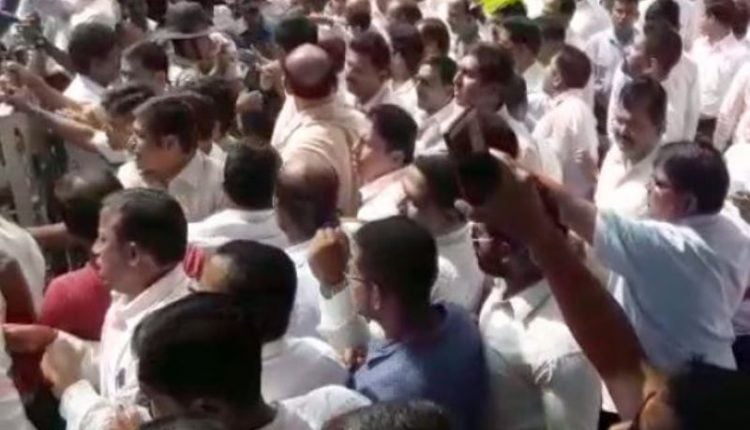 Cuttack: As was being apprehended, a face-off took place between the agitating lawyers of Orissa High Court Bar Association and the BJD legal front members after the latter attempted to enter into the High Court premise to join duty today.

An exchange of words took place between the two sides near the gate for quite some time over the issue sparking tension in the court premise. A few members of the BJD Legal Front were hurt in the ensuing scuffle.

In a preventive measure the administration has deployed at least 25 platoons of police force on the court premise to avoid any untoward incident from happening.

Similar, confrontations were witnessed in several other courts in the state including Bhubaneswar, Balasore and Baripada District & Sessions Judge Courts.

Notably, a split took place between the agitating lawyers after the Orissa High Court Bar Association declared to intensify its strike and burn an effigy of Chief Minister Naveen Patnaik in front of 164 Bar Associations across the State on October 31. In response to the decision, the BJD Legal Front withdrew its support towards the cease-work agitation of the lawyers yesterday and decided to attend court proceedings either from October 29 or 30.

Notably, the Bar Associations across the state are on a strike since advocate Debi Prasad Patnaik was allegedly beaten up by a group of cops near Nuabazar in Cuttack on August 28 following an argument.