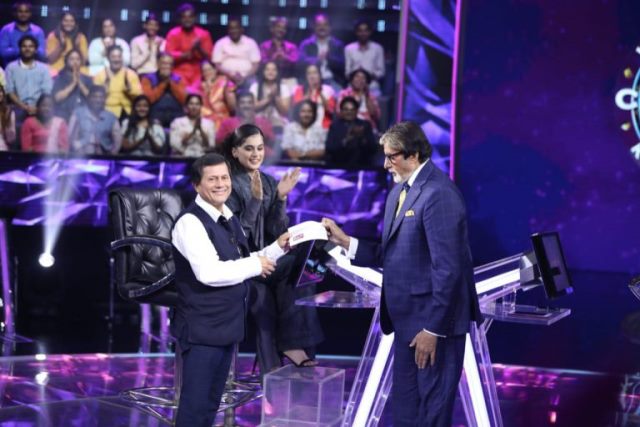 54-year-old Dr Samanta, who is also a Member of Parliament from Kandhamal Lok Sabha constituency in Odisha, is known for his exemplary contribution in the field of education.

With the efforts of Dr Samanta, KISS Deemed to be University provides free education, accommodation, food, healthcare to tribal children of Odisha. At present, as many as 27,000 students are studying at KISS in Bhubaneswar.

“ I lost my father at the age of 4, brought in utter poverty with seven siblings, without a roof on head or assurance of a meal.  Coming from such background, I had a dream to provide free education to the poor children, and the Almighty blessed me to establish educational institutes like KISS and KIIT,” Samanta said in the show.

Actress Taapsee Pannu, who has co-starred with Bachchan in PINK and Badla, helped Dr Samanta on his KBC 11 journey.

Read out the Questions and Answers  of the show:

Q: What is the user name on Twitter called?

Q. With respect to vehicles, what does “Odd-Even” in Odd-Even Scheme implemented by the Delhi government refer to?

Q: In which of these competitions or series is the form of cricket played the shortest?

Q:  Which film features this song? (audio plays at the background)

Q:  What is the literal meaning of “Khumbh, as in “Kumbh Mela”?

Q: Which of these buildings was the official residence of the first prime minister of India?

Q: The Dr Abdul Kalam Island, used for testing missiles, is off the cost of which Indian state?

Q: Identify the temple shown in this video? (video plays on the LCD screen)

Q: Which word, meaning crocodile in Persian, was used for medieval Sikh warriors?

Q: Pakyong Airport is the first airport of which state?

Q. Which king of the eastern Ganga dynasty started the construction of the great Jagannatha Temple at Puri?

With that, the hooter signaled to end the show.  The duo used lifeline thrice before winning Rs 12,50,000 in the show.

Dr Samanta said, the winning amount will be used for the KISS. He also appealed one and all to serve the poor people according to their own capacity, saying ” Tum Garibon Ki Suno, Bhagban Tumhara Sunega ( Listen to the poor, God will listen you) ”

Jumbo electrocuted after tumbling over trap for wild boars in Sambalpur