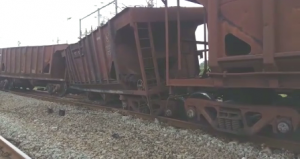 Rayagada: Train movement on the Jharsuguda-Vishakhapatnam route was affected on Sunday afternoon after a goods train derailed near Rayagada railway station. However, no casualties were reported in the incident.

Reports say four wagons of the train adjacent to the engine skidded off the track while it was on its way to Vishakhapatnam from Jharsuguda on Track No.3 of the station. The driver and the guard of the train had a close shave in the incident.

Railway officials at the Rayagada station immediately rushed to the spot and made necessary arrangements to remove the derailed bogies and repair the damaged tracks. Efforts are also on to restore traffic through the route on a war footing.

The cause of the accident is yet to be ascertained, Railway sources said.