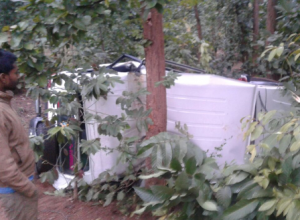 Baripada: At least two persons were killed and two others sustained critical injury after a Bolero they were traveling in, rammed into a road side tree at Tangabila Square on NH 49 near Jashipur in the district last night.

The deceased have been identified as Pradeep Mohanta and Sukra Nayak.

The accident took place late in the night while at least four persons from Jashipur area were returning after attending a marriage party in a neighbouring village. The driver of the Bolero they were traveling in, lost control over the wheels causing the vehicle to skid off the road and hit a road side tree at Tangabila Square. Two persons were killed on the spot as the Bolero turned turtle after the accident.

Two others who sustained critical injury were rescued out of the mangled vehicle by some locals today morning and rushed to the Karanjia Community Health Centre (CHC). Their condition is stated to be critical.

Karanjia Police have reached the spot and seized the Bolero along with the dead bodies.