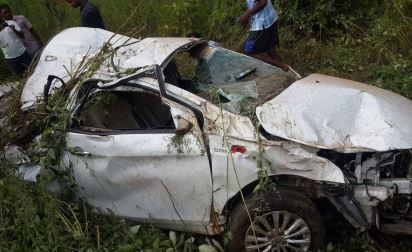 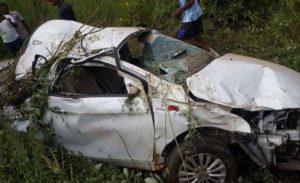 Sundergarh: Two persons, including a woman were killed and another woman sustained critical injury after the car they were traveling in hit a roadside tree on State Highway No-10 near Badabahal area under Bhasma police limits in the district early morning today.

The deceased have been identified as Roshan Nayak of Manasikani and Supriya Patel of Bhedabahal area.

It is suspected that one of the victims, who was driving the car suddenly lost control over the wheels due to some reason and smacked into a road side tree. While the vehicle got completely mangled in the accident Roshan and Surpriya died on the spot. Another woman Arati Nayak who was also inside the vehicle was grievously hurt and was rushed to the Sundergarh District Headquarters Hospital (DHH) in critical condition by some locals.

Bhasma Police reached the spot getting information on the incident and seized the bodies along with the mangled vehicle.