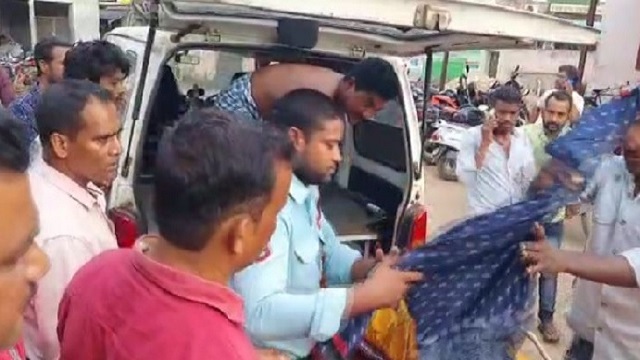 Dhenkanal: In a heart-wrenching incident on the eve of Diwali celebrations, eleven persons were injured and three were reported critically injured in a firecracker shop explosion in Badasuanlo village under Kamakhyanagar police station limits here in Odisha this afternoon.

The critically injured persons have been identified as Jagabandhu Nayak, Dushmant Nayak and his 9-years-old son Pratik and Anwesha Pal.

According to reports, today afternoon, the people were buying crackers from Sisir Pal’s cracker shop.

Suddenly the shop caught fire due to some unknown reasons and a state of panic surrounded the palace. Besides, all the crackers in the shop were set on a blaze, which resulted in an explosion.

As a result, four persons including a minor and other three were critically injured and around eleven people were injured from the explosion.

After hearing the sound of the explosion, the local people rushed to the spot. Seeing the fire accident, they immediately alerted the Fire department and started rescuing the injured.

Soon, the Firefighters team reached the spot and started to extinguish the fire.

In the meantime, the 4 critical injured persons were rushed to Kamakhyanagar hospital for treatment. Later, they were shifted to the Cuttack SCB hospital through an ambulance for further treatment.

As per the information from the doctors, out of the four critically injured persons, the minor boy and Anwesha have received critical injuries from the fire accident, and they are being attended by the doctors.

On the other hand, after much struggle the firefighters extinguished the fire from the location.

Xi Jinping expects to be in command till 2035

World’s largest volcano erupts in Hawaii for first time in…