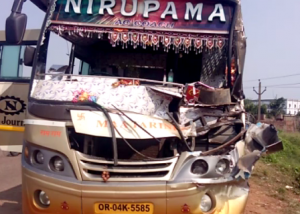 Choudwar: At least 10 persons were injured and one of them turned critical after a passenger bus smacked into a lorry truck at Bandala Square on NH 16 under Tangi police limits in Cuttack district, today.

The incident took place in the afternoon while the ill-fated bus namely, ‘Nirupama’ (Registration Number OR 04 K 5585) was on its way to Bhubaneswar from Jajpur. Near Bandala Square a lorry truck running ahead of the bus gave a sudden brake after being intercepted by a group of RTO officials. As a result, driver of the bus lost control over the wheels and struck the truck from rear. The impact was so serious that the bus got completely mangled from the front leaving 10 persons injured on the spot.

The injured were rushed to the Tangi Community Health Centre (CHC) immediately by some locals and one critical of them was later shifted to SCB in Cuttack.

Police have reached the spot and seized the bus.