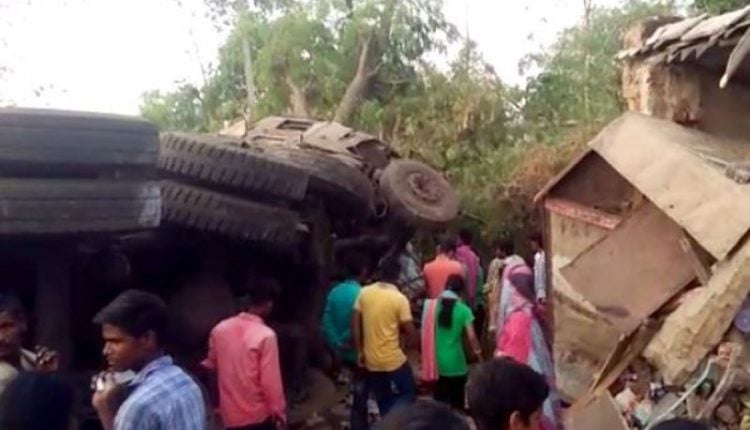 Angul/Phulbani: At least one person was killed and 16 others, including a minor boy, were hurt in separate road mishaps in the state last night.

In the first instance, a ten-wheeler cement laden lorry truck (Registration No. OR 05 AN 9666 ) rammed into a roadside shop at Sanahula Square under Thakurgarh police limits late in the night after the driver lost control over the wheels. Three persons who were partying inside the shop sustained injury in the crash and one among them identified as Srikant Behera died at Angul DHH after being rushed there for treatment.

Angry locals blocked Boinda-Athamalik road this morning and demanded compensation to the kin of the victims.

Police have reached the spot and are trying to pacify the irate mob.

In another incident, at least 14 persons including a 10-year-old boy sustained injury after an auto rickshaw (OD 12 A 8881) they were traveling in turned turtle on Kuerenga ghati under Siangbali panchayat in Phulbani district in the same night.

While overloading was suspected to be the cause of the mishap, the injured were admitted to Daringbadi CHC and later shifted to Baliguda Sub Divisional Hospital.

Police have seized the mangled vehicle and are investigating into the incident.

Let’s strive to bring the magic of books back into our lives, inculcate habit of reading: Odisha CM