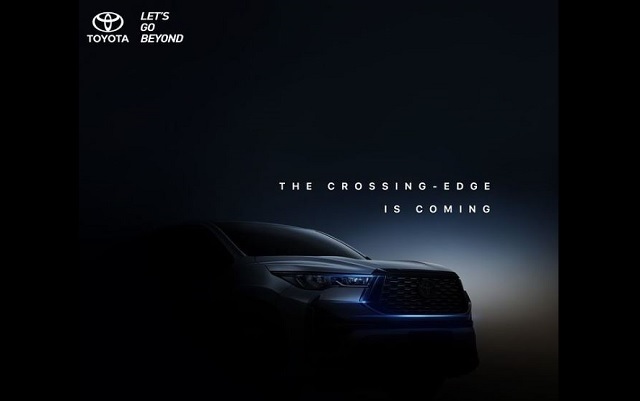 According to the latest spy shots, the Hycross will offer multi-layered dashboard design. There is a presence of floating touchscreen along with the presence of silver finish. There are no physical buttons visible on the Hycross and this is great in terms of modernisation. When it comes to the interior of the MPV, we assume that the car will offer dual tone combination.

Toyota Innova Hycross debuts in India, to be offered in…

Toyota Innova Zenix unveiled in Indonesia, to debut as…

Toyota teases Innova Hycross ahead of launch for the first…

When it comes to exterior, the Innova Hycross gets a large hexagonal grille that is quite similar to the Corolla Cross SUV that is sold in the International markets. The key highlights in terms of design include L-shaped inserts, refreshed bonnet design, new LED headlamps and much more. Similarly, the MPV gets 10-spoke alloy wheels, panoramic sunroof, 360-degree camera, and much more.

The new Innova Hycross gets monocoque architecture and a front-wheel drive layout. The Innova Crysta on the other hand gets a ladder-frame chassis along with a rear-wheel drive set-up. Speaking about the engine of the Hycross, the MPV will not offer a diesel variant. Both the engines offered on the car will include 2.0-litre petrol engine. It is expected that while one variant will get a 2.0-litre NA engine, the other will get a hybrid engine. For the sake of cost-cutting, Toyota will localise the hybrid powertrain technology, said reports.

The prices of the Innova Hycross are expected to be announced at the Auto Expo 2023. Post its launch the MPV is expected to be sold across existing Innova Crysta. For those who are unknown, the Innova Crysta is currently sold in a Petrol engine only. In terms of price, the Toyota Innova costs somewhere between Rs 18.09 lakh and Rs 23.83 lakh (Ex-showroom New Delhi).