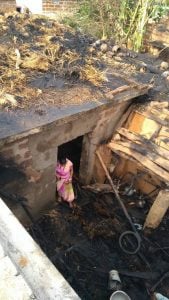 At least one person was killed while two out of five others were injured critically in a massive fire that engulfed Gengutia village under Sadar police limits in Dhenkanal district late on Wednesday night.

The fire also reduced eight houses and properties worth lakhs of rupees to ashes. Meanwhile, the injured are undergoing treatment at SCB Medical College and Hospital in Cuttack.

The mishap, reason of which is yet to be known, occurred late last night when most people were asleep. On being informed, fire brigade personnel reached the spot and brought the fire under control.