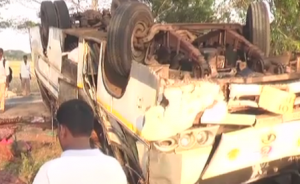 Puri: In a tragic incident, at least four persons including the driver were killed and 40 others injured after a private bus turned turtle and plunged into a canal on Puri-Konark road on Wednesday morning.

The bus ‘Hari Om’ was travelling from Astaranga to Paradip. The bus, which was running at a high speed, lost control and fell into the canal. While the injured persons were shifted to nearby Kakatpur hospital, a few had to be shifted to Bhubaneswar.

The police have begun investigation into the incident.

On the other hand, demanding compensation for the family of the deceased, the locals staged a blockade in the area.

In another incident in Keonjhar, a person was killed and another injured after a truck hit them while they were crossing the road today morning.

While Ramachandra Naik, died on spot, another Sumant Naik was injured and is undergoing treatment in a local hospital. Locals have demanded compensation for the family of the deceased.