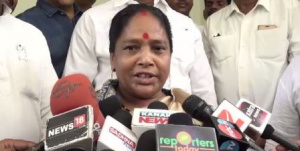 BJD supremo and Chief Minister Naveen Patnaik welcomed Majhi and hundreds of her supporters in the presence of many other senior leaders at his residence, Naveen Nivas.

Patnaik said Majhi’s joining will boost the party’s efforts to work for the people of Nabarangpur district, especially the tribals.

“I was in Congress party to work for the people. But, I could not due to the intra-party fight. Besides, I was influenced by the ideology of the BJD and the pro-people works of the Chief Minister,” said the former chairperson of Nabarangpur Zilla Parishad after joining the ruling party.