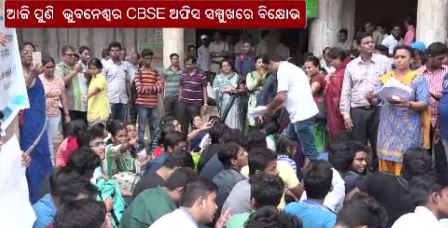 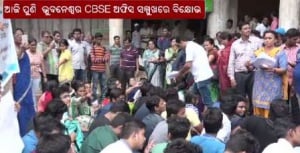 Bhubaneswar: Demanding reevaluation of answer papers and declaration of withheld results, students who appeared in the annual class XII examination conducted by Central Board of Secondary Education (CBSE), along with their parents, protested for the second consecutive day in front of the CBSE regional office here on Tuesday.

The CBSE results for class 12 was declared on Sunday. The students had launched a sit-in in front of the CBSE office on Monday after finding that results of around 50% of students in the Bhubaneswar Zone had been withheld.

Later, they drew the attention of Chief Minister Naveen Patnaik by submitting a memorandum seeking his intervention in the matter. They staged demonstration again this morning when there was no response from the Chief Minister.. The agitating students have sought time from the CM to discuss the issue.

The agitators threatened to intensify their stir and move the Orissa High Court if their problems are not solved within a week.