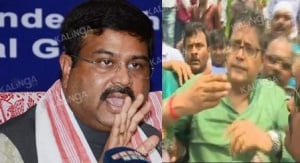 Bhubaneswar:  Union Petroleum Minister Dharmendra Pradhan on Wednesday alleged that the attack on Kendrapara MP Baijayant Panda during the inauguration of an overhead water tank project in Mahanga yesterday was carried out at the behest of BJD supremo and Chief Minister Naveen Patnaik.

Speaking to reporters here, the Union Minister said, “The attack on Baijayant Panda was carried out as per CM’s directive. The incident is condemnable.”

On the other hand, Health Minister Pratap Jena termed the attack on the MP unfortunate and regrettable. “The incident occurred due to Panda’s media statements that affected BJD negatively,” he said.