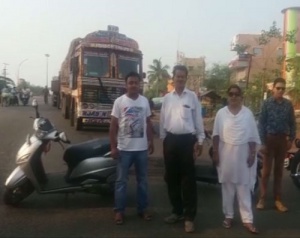 Normal life came to a grinding halt across Mayurbhanj district due to the 12-hour bandh on Thursday called by the district bar association.

The Bar association has called for the dawn to dusk bandh in protest against the delay in admission to Pandit Raghunath Murmu Medical College in Baripada.

Hundreds of vehicles, including passenger buses, were left stranded on NH-49 and 18 as the protesters blocked roads at different places.

All government offices, educational institutions, shops and other business establishments remained closed on account of the bandh, which got massive support from different organisations including political parties like Congress, CPI and CPM.

Meanwhile, a meeting to discuss the issue is slated to be held in the presence of Union Health Minister J P Nadda and Petroleum Minister Dharmendra Pradhan at Nirman Bhawan in New Delhi at 3 pm today.

Notably, it was earlier announced that admission to the Medical Colleges in Baripada and Koraput was scheduled to commence from this academic session. But the Medical Council of India (MCI) has so far granted the Letter of Permission (LoP) only to the Sahid Laxman Nayak Medical College and Hospital (SLNMCH) in Koraput while the MCI team is yet to visit Baripada to take stock of the infrastructural facilities at the medical college.