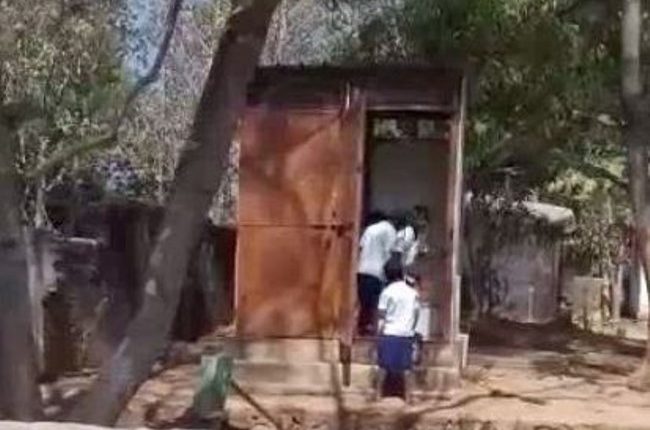 Nabarangpur: In a clear breach of norms, students were engaged in cleaning the latrine of a primary school under the Nabarangpur District Headquarters limits recently. The matter came to fore after a video on the same went viral on social media on Wednesday.

As could be seen in the video which is available on various social media platforms, as many as four students in uniform were cleaning the septic latrine located on the premises of the Forest Colony Primary School in Nabarangpur District Headquarters.

However, the Headmistress In-Charge of the school, Premalata Asha defended the stand of the school over the issue after a group of parents met her today.

“There is nothing wrong in engaging the students to latrine cleaning activities. Students do clean the toilets they are using on a daily basis, as a part of the tasks undertaken by the School Sanitation Committee. Nobody is forcing them to do this,” she maintained.

However, after being contacted over the issue, the Block Education Officer (BEO) Chittaranjan Madhi said he had taken the matter seriously and would take appropriate action against the guilty after an inquiry.

Bijepur By-polls: Naveen to campaign for Rita Sahu on Feb 19, 21