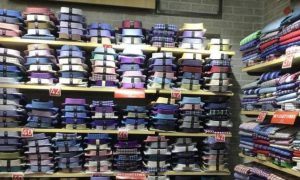 Bhubaneswar: Peter England, one of the famous menswear brands in the country, was made to realise its mistake and apologise for using Bengali tags to wish people of Odisha on the occasion of Durga Puja.

The garment company had published its Ad in leading dailies in Odisha last week using ‘Happy Pujo’. The same tag was used across its stores and outlets in the state. Some active citizens from Odisha resented the move. It was a concerned citizen Rudra Prasanna Rath, who led the battle.

Rudra wrote an email to Peter England authorities by pointing out their mistake. He pursued the case relentlessly. Although there was a delay in replying to the email, they finally regretted and promised to change the advertisement with the message: 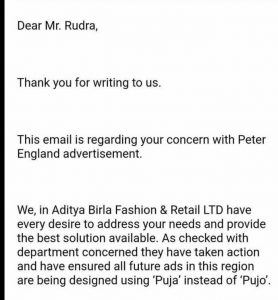 It is being a hailed as a major victory for the Odias, who defy any injustice or mischief aimed at twisting the facts. Not long ago, Air Asia was taken to task on a similar issue.