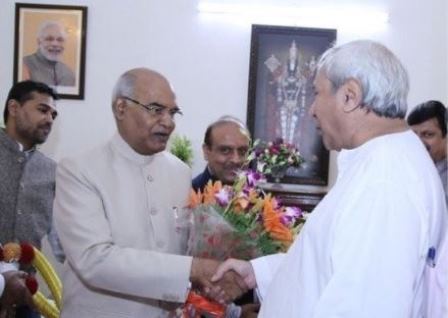 “I met the President now. He has agreed to come to Odisha either on March 17 or 18. He will inaugurate the museum-cum-learning centre at Anand Bhavan in Cuttack in memory of Biju Babu,” said Patnaik while speaking to reporter after meeting the President.

During the meeting Patnaik also presented a book “The Tall Man Biju Patnaik” to the President. The book authored by Sundar Ganesan is a monumental work on the legendary leader.

This would be the first visit of the President to the state after he assumed the highest Constitutional post of the country. This was also Naveen Patnaik’s first meeting with Kovind after the latter was elected the President.

It is worthwhile to mention here that BJD, lead by Naveen Patnaik, had voted for him in the presidential elections held in July last year.

Naveen and his kin had donated the property to Cuttack district administration in January, 2015, to convert it into a museum dedicated to the charismatic leader. The Odisha government has spent around Rs 1.1 crore on renovation of the building and for its beautification.

Anand Bhawan was constructed by Biju’s father Laxminarayan Patnaik in 1900s where Biju was born on March 5, 1916.

25 injured, 3 critical after bus falls off bridge in Keonjhar