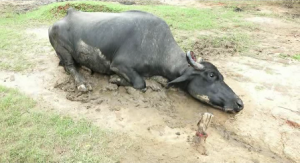 Cuttack: Posing a serious threat to livestock farming in the area, a number of buffaloes have been found dead in Pathar Mundai village under Gatirout Patna area of the district due to an unknown disease over the last couple of days.

According to reports, around 10 buffaloes have died in the last seven days in the Pathar Mundai village after being infected by an unknown disease. While veterinary officials are yet to find an answer to the issue, some locals claimed that the buffaloes could have died after coming in contact with rotten buffalo meat buried in a nearby ground in the village. The meat was recovered while being illegally transported by a truck in the village a few days ago.

“Around 10 buffaloes have died in the village so far and several others have fallen sick. We fear rotten buffalo meat buried in a field near the village could be behind the menace as some stray dogs were seen feasting on them after digging them out of the ground recently,” said Prakash Behera, a villager. Government should take immediate step to check the spread of the disease as livestock farming remains the sole source of income for several families in the village, he added.

Efforts to seek an opinion from the Chief District Veterinary Officer over the issue failed.