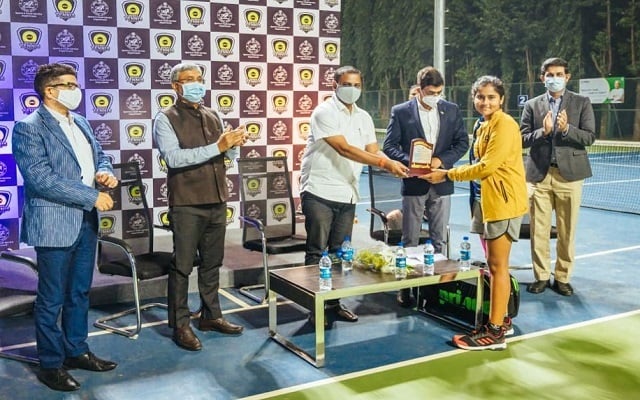 The players who were felicitated in the function were Debasis Sahoo and Sohini Sanjay Mohanty.

Debasis Sahoo is currently ranked as number one, U-16 & U-18 player in Odisha. He has shown huge promise as a budding talent at the national level. Debasis is the first player from Odisha to play the prestigious junior event of “Road to Wimbledon Master Qualifying Tournament” in the U-14 Boys category in 2019. He is currently preparing for Junior Davis Cup and will make the state proud if he does so in 2022.

Sohini Sanjay Mohanty is currently seeded number one in U-14 girls’ category in Odisha and seventh in India. She has started making her journey into big leagues like ITF. She has not only earned numerous laurels but has the distinction of being the youngest player from Odisha to have won more than sixty titles. She stood 3rd representing India in the U-11 Ten-Pro 2019 at Rafael Nadal Academy, Spain.

On this occasion, the Minister also launched a mobile application of the Odisha Tennis Academy. The application will facilitate online registration of players for coaching, assignment of coaches, booking of the courts, issue of identity card etc. to the players.

Currently, five coaches are engaged in Kalinga Stadium and coaching more than one hundred young players.

The new office of the Odisha Tennis Association was also inaugurated by the Minister on this occasion. Asit Tripathy, President, OTA, expressed hope that the Academy will produce players of national and international fame. Dr. Satyajit Mohanty, Honorary Secretary, spelt out the future plan of the Academy in promoting tennis in the State and thanked the Sports Department of Government of Odisha for the support in running the Academy.

The function was organised by Sanjeeb Panda, Joint Secretary. The other important dignitaries present on the occasion were Brahmananda Mishra, Asit Pradhan, DK Tunga, Bibek Patnaik, Satyajit Mohanty (Rubuna) and Chief Coach Vinod Seth. Other officials of the Odisha Tennis Association along with the officials of Sports and Youth Services Department were also present in the function.