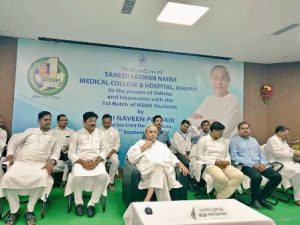 The new government medical college that aims at catering to the healthcare needs of the people of Koraput, Nabarangpur and Rayagada districts also started teaching for MBBS classes for the 2017-18 academic year soon after the inauguration.

Talking to reporters following the inauguration ceremony of SLNMCH, Naveen dubbed it as a historica occasion for all Odias.

“It is indeed a historic occasion for all of us. With this medical college and hospital, a long cherished dream has become reality. Now the number of MBBS seats in the state has gone up to 850. We expect to have 200 more seats by next year to cross the mark of 1000,” said Patnaik.

Patanik also said that the Koraput medical college will play a vital role in providing qualitative health service to the people, mostly of the tribal dominated districts.

Notably, construction of the medical college, which began in 2015, was completed within two years. The college has so far engaged 22 professors and 28 assistant professors to impart education so far. All infrastructure facilities are also ready in the institution to commence MBBS classes.

The Medical College and Hospital has been erected on 52 acres of land at an estimated expenditure of Rs. 187 crore. The Odisha Chief Minister had laid the foundation stone for the college on August 3, 2015.