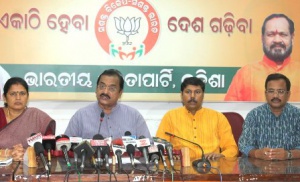 Bhubaneswar: The Odisha BJP has decided to invoke ‘Ahimsa’ to counter the egg attacks on its Union Ministers, by observing a ‘Maun Satyagraha’ or silent protest across the state tomorrow.

The Maun Satyagraha will be held at all Zilla Parishad Zones, NACs and Municipalities from 10 AM till 1 PM on Sunday.

“The BJP will hold the Satyagraha to protest against the egg attack on Union Ministers Radha Mohan Singh and Jual Oram as well as the brutal gangrape and murder of a widow in Dhenkanal’s Kankadahada”, says party’s Vice Prsident Sameer Mohanty.

The BJP leaders have accused the BJD Govt of becoming blood-thirsty and attacking its cadres and leaders across the state. They are aided by the police, alleges BJP.

We will continue to fight for the right of Odias, says Sameer Mohanty.