I’m not on social media, found about duping bid from Kalinga TV: Babusan

Bhubaneswar: Ollywood star Babusan on Sunday refuted the allegation of duping leveled against him by a woman.

“The Facebook account used in my name is a fake one as I am not on social media. I got information about the fund collection from Kalinga TV. Collection of money in my name is totally wrong,” said Babusan while speaking to Kalinga TV.

Calling upon people not to fall prey to any fake accounts of him and others, the actor said, “Why should I ask money from people with whom I’m not related at all? If I need money so urgently, I would have asked my parents for it.”

The new means of cheating people came to light after a woman identified as Bandita Bag of Rourkela alleged that someone chatted with her on Facebook using an account with Babusan’s name for three days. Later, he sent an account number and demanded Rs 2 Lakh from her on the pretext of various problems and schemes.

The impostor threatened Bag saying he would commit suicide if she refuses to pay. 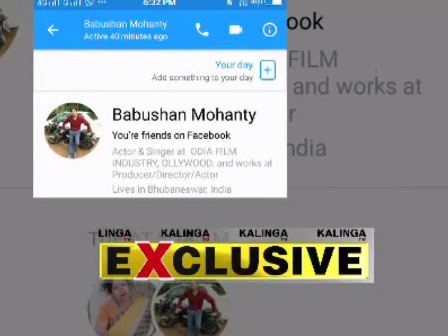 In a bid to win the trust of the woman, the man who claimed to be the Ollywood star Babusan uploaded the photo of the actor and his wife following which Bag agreed to give him Rs 80,000 but only after meeting him.

However, the accused tried to get the cash online and sent an account no – 32835167475 – which is in the name of one Sambit Mohanty. But when Bandita insisted on giving the amount only after meeting him, the accused gave an address – Plot No – 106, Behind Sai Temple, Vani Vihar.

Though the actor has pleaded his innocence in the matter, it needs to be investigated by the police, claimed the woman.